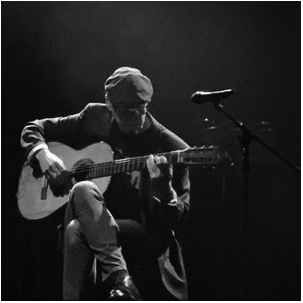 His session guitar work on “Old Black Roller” by Grant Maloy Smith (Celtic / Americana) spent 17 weeks on the Billboard charts, including eleven weeks in the Top 10.

Peter Janson is a Boston-based solo guitarist who weaves elements of jazz, classical, and improvisational music into compelling originals and intriguing cover arrangements that have earned him local, regional, and national acclaim.

While attaining his Master of Guitar Performance degree at the New England Conservatory of Music in Boston he focused on early music for stringed instruments, jazz, Indian classical and contemporary classical composition where he studied under David Leisner, Robert Sullivan, Thomas Oboe Lee, Thomas McKinley and others. It was at this time that becoming his own artist, through intense study of a variety of music from his interests as well as his multiple heritages, ignited in his soul, and his unique style of guitar music began to reveal itself: his passion for weaving elements from his roots in jazz, classical, and acoustic instrumental styles was formed. Since that time his performances have mostly been as a soloist playing six-string guitar and occasionally singing.

Peter won an NAR Lifestyle Music Award for Best Contemporary Instrumental Album for his Beautiful Day CD, and Album of the Year and Best Instrumental Album Acoustic awards for his co-writing and performing on Smooth Jazz Canada Awards nominee Jamie Bonk’s My World CD. He has composed and recorded music on 24 national and international CDs including eight CDs under his name, music for video games, and music that has been featured on TV, and a variety of regional and national documentaries including CBS News' "Living in the Shadows: Religion's response to human trafficking." All of his CDs have been featured on PBS, commercial and college radio, syndicated radio, Apple, Daily Motion, Groove Music, Rhapsody, Tidal, Sirius/XM, Music Choice TV, Pandora, Spotify, and in-flight programming resulting in over 3.3-million verified broadcasts in the USA, and more internationally spanning 116 countries. (BMI, SE, MLC)

Last, but perhaps most importantly, Peter Janson directs jazz ensembles and teaches a variety of courses, including private guitar instruction, at the University of Massachusetts Boston. He is a long-time artist-educator in its Performing Arts Department and is proud to be serving the students of such a wonderful minority majority campus.

Back To About Peter